Been thinking a lot about the “untranslatables” lately. A few months ago I came across a mini discussion on Twitter criticising the popular belief that certain Korean concepts, typically han, jeong, and nunchi, are so Korean that they cannot be explained to outsiders. That discussion led me to realise such beliefs often have a nationalistic, ‘self-othering’ undertone, wittingly or unwittingly.

Having said that, as someone who needs to switch back and forth between English and her native language continually throughout everyday life, I do occasionally feel what Anil Dash describes as “a linguistic equivalent of phantom limb pain” when my best English translation of an idea that I first have in Korean is still “a muffled approximation of [that] idea”.

One of such expressions that I seem unable to precisely convey is “사람을 갈아넣다”. Its word-to-word translation, “grinding humans in” [to keep the system running], would pretty much do the job. My “phantom pain” has more to do with the fact that in English it might strike as an overdramatic metaphor while Korean speakers would all know it is as literal as it can get.

I am witnessing on social media waves of awe about the Korean government’s response to the corona outbreak: e.g. demonstrating the unparalleled testing capability, mapping every citizen’s movement trajectories, offering the convenience of drive-through tests (taking about 10 minutes each), ensuring the tests are free to everyone including undocumented workers, and sharing the progress transparently with the rest of the world.

I am glad that the government seems to stay on top of the matter. It’s just that I can’t get the news out of my head that a Jeonju city official died last Friday of overwork while being on emergency duty in response to the outbreak and pulling consecutive overnighters. I can’t even begin to imagine the physical and mental strains that the CDC and health officials must be under over the last two months. 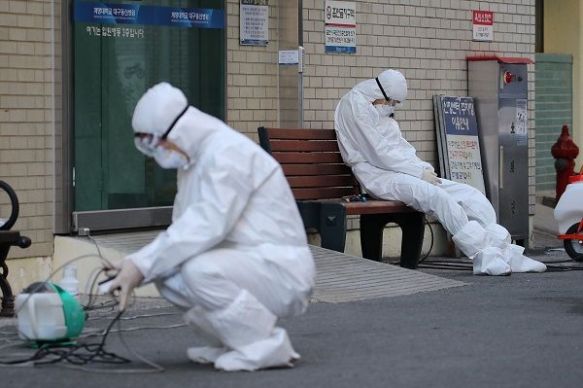