I used to mix up the words ‘space’ and ‘place’ a lot. Although the confusion had partly to do with English being a foreign language to me, it hasn’t been long since I realised a conceptual difference between the two. Many people have helped me along that path of realisation, although some of them might not even know they have done so. This post is about a couple of personally noteworthy moments.

The first one was when I was writing my MA dissertation on Internet advertising in 2000. I was perhaps too engrossed in the efficiency and effectiveness of the new medium, particularly the possibility of targeting and tailoring campaign messages, but my then advisor said in passing that digital technology had also expanded space for advertisers. This might not sound like a big deal, but the FIFA on PlayStation offers a virtual field where Coca-Cola puts an equally virtual banner up, for example. A space that had not previously existed.

The second and perhaps most awakening one was when I attended the workshop Asia’s Civil Spheres: New Media, Urban Public Space, Social Movements at the National University of Singapore in September 2011. The keynote speaker Mike Douglass opened the event by directing our attention to the continuous shrinkage of public space across Asian Pacific cities. To be more specific, cities are increasingly groomed and beatified, but beneath the tidier appearance, existing and potential civic spaces are being turned into enclosed, commercialised, and policed spaces. We have more malls than before, and malls are a place that feels public and is good fun to hang around in. If you want to stage a protest, however, you suddenly realise the malls cannot provide the space that you need for such public expressions of contention. (I happen to have a paper coming out on this topic, but I am going to write a whole separate post about that!)

So, every time I hear/read about aerial protests in South Korea, such as the one by Kim Jinsuk on the top of a 35-metre-high crane in the shipyard of Hanjin Heavy Industries in 2011 and the ‘Chimney Protest‘ by Lee Chang-geun and Kim Jeong-wook on 70-metre top of the Ssangyong Motor plant, which has just ended this month after 101 days, I can’t help but see past the extraordinary settings. In reality, ‘we’ just might have no choice but to climb vertically up and up to find any space left.

I don’t know Lee Chang-geun personally, other than we are mutual followers on Twitter, but I am glad he successfully made his point and came down safely. Many other members of the public expressed their support on Twitter and in different corners of Seoul during those 101 days, but my favourite was when photographer Shin Byung-mun literally paraglided his way up and took photos of the two protesters waving at him – and by extension at all of us on the ground. It was something very liberating to witness. 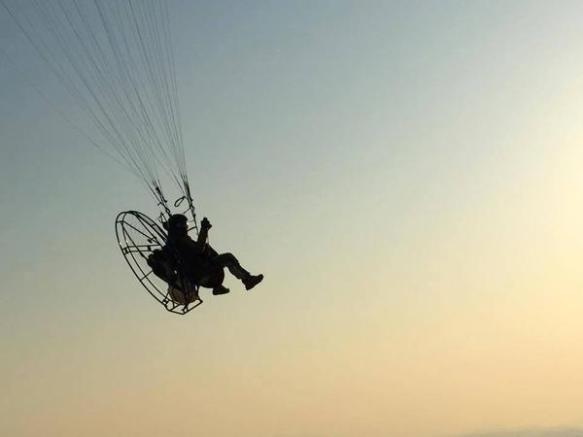 According to the latest news, Lee is now going to be arrested, investigated for the charge of obstruction of business, and possibly fined/sentenced for illegal occupation of private property.

+ It has been one year today, on 26 May 2015, since Cha Gwang-ho started what is now the longest-ever aerial protest in Korean labour history, on a 45-meter-tall smokestack against his former employer Star Chemical, to fight for his job back.